Psychology, or the word of the soul. That which affects the soul. Al that we do to the soul and much more. The Self interacting with the Not-Self. Not quite by coincidence, a long time ago. I was a psychology student specializing in sleep research. I believed physical information would reveal almost everything. And now ? I’m not so sure. 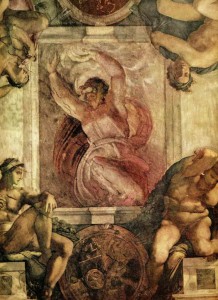 Looking into brainwaves, like “spindles” or “K-complexes” obviously did not mean all that much. However these little phenomena help you organize your thoughts on far more complex matters. Not for a minute you must believe your investigation will be earth shaking. We know not even a percentage of what there is to know about life and even less we understand about some of the things we know. When sometimes we hear scientists reciting textbook knowledge, we easily forget that factual knowledge is not the same as understanding. Still you have to try.
I knew then, some 25 years ago, i was more interested in the total phenomenon of “rhythm” in sleeping and waking, and life and death, altogether. When i look at scientific results in the field of sleep research from 1988 unto 2012, i see little progress. The things i investigate nowadays may be less scientific.

It is only a small step from day and night to sun and moon. Most things i write about are exoteric. They are written under the sun so to speak.. Esoteric topics, or topics known only in a small circle, i write about under the moon. They are moon-things. Then there are some things even the moon will not shed her light on. These things are hidden, and will stay hidden. Until they are seen in some “new” light.

In citing Alice Bailey’s “The consciousness of the Atom, Lecture II” we enter the realm of the psychological phenomena.

” The atom, then can be predicated as resolving itself into electrons, and can be expressed in terms of force or energy. When you have a centre of energy or activity you are involved in a dual concept; you have that which is the cause of movement or energy, and that which it energises or actuates. This brings us directly into the field of psychology, because energy or force is ever regarded as a quality, and where you have a quality you are really considering the field of psychic phenomena”.

As this has been the starting point of esoteric thought, it is also the beginning of the esoteric psychology. Modern science, when we are not careful, will drive us away from the quality aspect of life. We will come to see that that will also estrange us from individuality (f.i. with statistical truths). In the concept of “quality” we again will find our true individual soul.