Daniel Poldermans, born april 10 1886 had an unfortunate childhood. In march 1894, Daniel was not even 8 years old, his father, Hendrik Willem, born december 26, 1859, fell to his death from a rooftop. His mother, Margaretha Pieternella Strijaarts (july 24, 1883) died two years later. He grew up at an orphanage, problably one of the most well known in Holland, during the 19 hundreds, Neerbosch,

During his life however he appeared to have benefited from his rather disciplined upbringing. He was a man of many talents. I remember his death vividly. My mother and grandfather often went to pick me up from school. That day, april 10th, 1959, he had collapsed on the side walk. My mother had to get me from school first, so in tears all the way, she explained what had happened. Now I remember him still lying there on the side walk  when we passed the spot on the way home. In my memory I see him lying there covered by his brown coat. I  kept  asking, “was that really him” ? . In fact I don’t know if that is the truth or that in my mind I mixed up the later image of him lying in his deathbed with an empty spot on the side walk. Strange how memories seem to fabricate themselves. 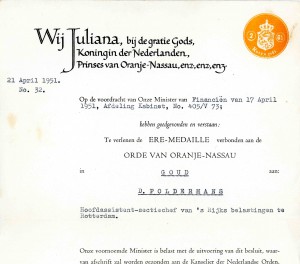 When you caressed his head you could feel the metal plate, so my older brother told me. It was there to cover the hole in his skull caused by a smugglers gun. His courageous actions were rewarded as you can see. Before the second world war the border between Holland and Belgium could be a dangerous place. 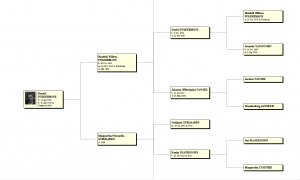