Arie Vernes, born 1816
Arie, in all fairness, is my favorite. I think the older I get, the more I see my self in this rather tarnished face. He is the son of Johannes Vernes (born 1785), and Maria Buytenhek. His Brother Evert Arie or Arend (1814), was a ship carpenter. His brother Pieter (1812-1873) was a Sea Captain. There was a younger sister named Catharina after her grandmother, Catharina van Hoorn.  At 16 already his father had died so one can imagine the struggle for existence in this family. His mother, Maria Buytenhek was a shop owner, so there might have been a reasonable income still. Arie was a skipper most of his life, but in the marriage certificate of februari 15th 1843, he is called a merchant. His wife, Jacoba Helena Weinreich is then 20 years old. Both her father, Johan Thomas Weinreich (died 19-5-1837) and mother Johanna Commers (died 21-10-1838) are deceased and so, in need of parental consent, at the wedding she is accompanied by her 81 years old grandfather from mothers side Bartholomew Commers, a merchant.

By the time their second son Johan Thomas is born in 1855, Arie is a skipper. The birth certificate states that the child was born in Nieuwveen in the boat of his father. The family, Arie, Jacoba and their, then, two sons lived on board a “Kraak” called “De Jonge Arie” (SAD archive 6 inv.nr 7280) in Dordrecht. In 1860 and 1864, Frederik George and Evert Arie, the latter my great grandfather, were born.

In march 1881 Frederik George, at the age of 21 died, presumably of Tuberculosis. In Amsterdam he is then a registered skipper. The Amsterdam archives further show he had been admitted in the Amsterdam Hospital the “Binnen Gasthuis” already in December 1880.

Like Arie’s brother Pieter, their lives on the water cost them dearly. On his first voyage with his father, Pieter’s son Aalbert drowned at sea in 1852. Arie’s son Johan Thomas drowned in the river Maas, near Waspik, november 10th 1883. In august that same year, Arie, Jacoba, Johan Thomas and Evert Arie had come to Amsterdam.  In the Amsterdam archive they are registered skippers living at the “de Ruyterkade”. Van Goghs painting of Amsterdam, “the Ruyterkade” is painted approximately that year. Looking at it, I wonder if somewhere in that picture there is a trace of my ancesters. 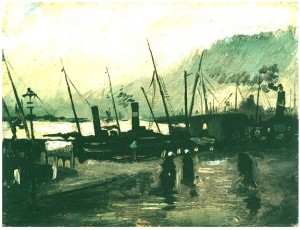 The eldest son Arie, lived and worked in Rotterdam, already since 1875. In Johan Thomas’s death certificate it is Arie who identifies the body of his drowned brother. According to my great grandfather, there had been an accident during a storm. He also remembered seeing his dead brothers body, it had swollen immensely after being in the water for some time. For Arie and Jacoba loosing their second son in two years time must have been devastating.

Arie himself died januari 13th, 1888, in a house at the Bolwerk in Rotterdam. For Jacoba the next tragedy was loosing her eldest son Arie in 1893. I was told Aries young children, lived with my great grandparents before, in the early 1900’s, they embarked on journeys to Africa, the US and Canada, where at present many relatives live. Jacoba herself passed away in a house on the Maaskade. My great grandfather Evert Arie, lived a blessed life lasting 94 years.