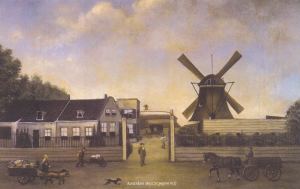 Wind and water
You see a picture of the Vernes Mill. It was owned by the brothers Jan and Leendert Vernes (born around 1640, living in Cralingen, Rotterdam). Details of the Mill (it was outside the East Gate by the river Maas) you’ll find in the article ” De vier Hendrickskinderen (Vernes te Dordrecht), or The four Hendricks Children, Gens Nostra 2007,by H.M. Kuypers). The mill used for dying textiles was called “The Eendragt”. It was demolished around 1880. The painting (dated 1893) is by F. van Geldorp, after a pen drawing by Jacob Kortebrand from the 18th century. It is to be found in the collection of the Dutch Historic Museum, inv.nr. 10880.
This possibly explains why another part of the family found their living on the water. Of course these miller products would have to be transported. So my great-greatgrandfather was a skipper from Dordrecht, as was his father Johannes. Around 1850, Arie lived on a ship called “De Jonge Arie” or “The Young Arie” in Dordrecht with his wife Jacoba Helena and sons Arie and Johan Thomas.. 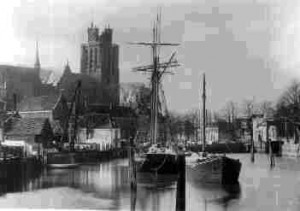 You’ll find this documented in Bulletin Historisch Huizenonderzoek “Het Nieuwe Werck” nummer 19, juli 2007. Also some family members were carpenters, building mills. So yes, as the the dutch say we have a “tik van de molen” or we are “touched by the wing of a mill”. In plain english meaning we have a screw loose.